Welcome, gentle reader!  Warning - this is a long post on miniatures, with nary a music review to be found.  Music reviews will return soon, however.

In the meantime, at long last I've finished another major project on the figurine front.  This particular item is a diorama both Sheila and I have been working on (in fits and starts) for over two years.  It started with an idea I had of an old, abandoned church that had become a vampire lair.  I bought the initial pieces, but then kept working on other figures instead.

After a while, Sheila asked if she could start doing the diorama, since I wouldn't get on top of it.  I said that would be great, and after we agreed on the general concept, she put together the church and painted it up beautifully.  Then her interest began to wane, and the project sat fallow for a while, until I took it on and finished the grounds and interior.

So two years later, here it is - a collaborative effort with my favourite person! (note - click on photos for larger images):

The whole thing is about 18 inches deep by about 30 inches wide.  Any diorama should have a good back story about what is going on, and this one does - but before we get to that, let's zoom in a little on the front end and admire Sheila's stained glass windows.  The church is full of these, and they are Sheila finding great images of stained glass and then shrinking them to the right size, printing them, and fitting them into the church windows.  On the lower right, you can even see where she's simulated one being smashed by a fallen tree. 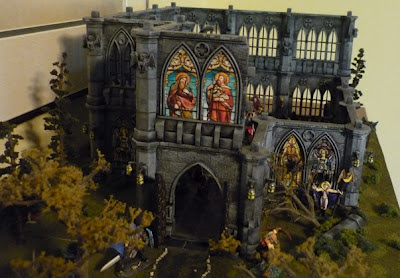 As you can see, there is some action in front of the church - what's that about?  Let's zoom in and take a look at the interior (with the help of a flash - it's dark in a vampire lair):
The story goes that years ago an imprisoned vampire was freed when his coffin was thrust up through the floor of the church (I have another cooler coffin for this purpose, but haven't painted it yet).  The clergy were driven out, and vampires took the place over.  For years, this nest of vampires has been preying on the local villagers, who have learned to shun the church as a place of evil.

Now, with the help of some vampire hunters, protected by a holy order of battle nuns (these folks are on the left), the locals have decided to attack the church and drive out the vampire menace.  Or perhaps just rescue that victim in the back right.

Outside, local villagers who've joined in desperately try to hold the door against vampire reinforcements (including a fetching lass that looks fairly relaxed up on the hilltop to the left).  We'll see more of these over-matched villagers in a minute, but I like this shot, which shows some of my work building trees and scenery, and if you look carefully, you can see the lead vampire hunter through the open door, raising his cross! 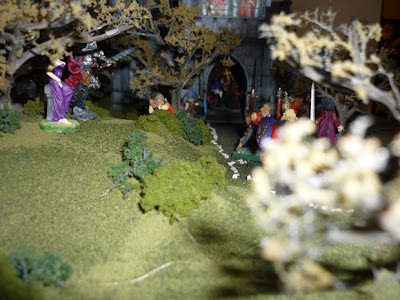 Below, behind a collapsed column, a local townsfolk holds off a vampire wizard.  She looks like more than a match for him, although going into battle with a yellow moon standard and a goblet is a bit flaky, and doesn't speak well of her judgment.

On the back left  you can see a holy warrior doing battle with the vampire's champion, who is desperately trying to get into the church and lend aid to his king and queen.

Further down the path to the church, another townsman holds off a vampire knight with his lamp and crudely fashioned mace.  I don't like his chances.  In behind, a lunging vampire leaps from the hill at a determined looking (but older) villager with a two handed sword.  I imagine the last thoughts in the villager's mind will be "he's coming right at me!" 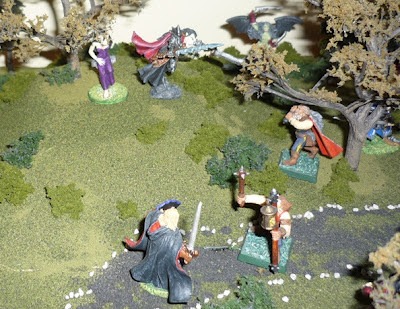 As the battle rages, in the shadows the church evil continues to claim its victims.  Will our heroes win the day, and if they do, will they notice this poor lass before she expires?  Who knows?  This action will be forever left unresolved.

And now, since this took two frickin' years to finish, here's a few shots for those who like to look at 'making of' features on their blu-rays.

As I noted prior, Sheila got the ball rolling by assembling and painting the church itself.  Here she is hard at work.  It was very large and unwieldy and at times she just took the whole thing into her lap: 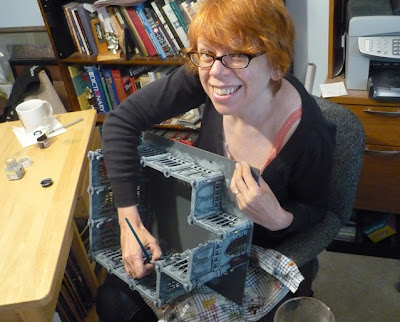 The next step were finishing touches, including the brass on the door, and the stained glass windows I mentioned earlier.  These really make the finished product look great - this church wouldn't be nearly as cool without all the work Sheila put into those.  Also in this shot, Inigo peers up nervously at our work, no doubt wondering 'will there be vampires?'  Damn, I miss you, Inigo.

Then Sheila glued down some basic 'train set' grass as a base to build up from.  She also 'laid' the interior floor, but more on that in a second:
Around this time, Sheila lost interest and I took over.  She had started to build some model trees, but they are finicky and time consuming.  Here's how they start:

And here's me doing my magic and finishing them off, one tiny branch at a time.  I'm getting some 'help' here from Vizzini, who is not nearly the well-behaved lap cat for modeling that Inigo was but is still very cute, I suppose:
And here are the trees complete, and glued to the base.  I really enjoy building these trees.  I'm kind of like that guy in the Tolkien short story "Leaf by Niggle" who loves painting leaves.  I find building trees very meditative and restful.  You can't over-think or under-think the placement of each piece of foliage.  The best I can describe it is that you have to think organically, but try not be aware of doing that.

I though that hiding all the seams and staples holding the grass down would be difficult, but it was actually easier than I expected.  The key is to hide the seams, but not let what you're hiding them with look straight and uniform.  Nature doesn't do that.


Sheila had initially copied a picture of marble over and over again and created realistic 'tile' paper that she glued down on the inside of the church.  To add to this, I built a mound of earth in the middle of the floor with some simulated broken tiles where we could later add a coffin.  Sheila suggested I also put some rubble and rocks around the edge of the interior to make it look more run-down, which was a good idea.  Here it is just before it gets figures added to it. 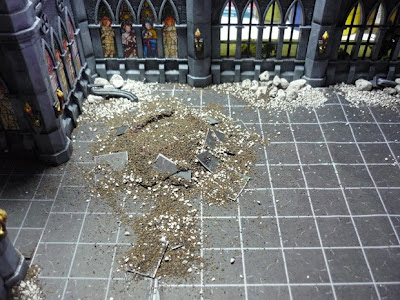 So that's how you do it, folks!  I'm looking forward to a less ambitious project for my next miniature.  It will be a female elf paladin.  Maybe she can help out the assault on the vampire church, because I think the villagers and battle nuns are a bit out-numbered.
Posted by Logan at 3:13 PM

Very cool! Thank you for finishing it off - good teamwork!

Aw, I love the picture of Inigo in the background.

Congrats on finally finishing it! It looks great.