It has been a week since I wrote a review and for this, gentle readers, I apologize.

This is because I was going to see this next band in concert and I wanted to spend a full week immersing myself in their music so I could review both the new album and the show (both are below).

This also meant that Guns ‘N’ Roses, who were slated to be the next album I reviewed randomly, were bumped. I might’ve felt worse about it except for all the times Axl Rose has left fans hanging when he cancelled a show. It was high time someone cancelled on them.

So instead, I am going to give the people what they want – or at least what I want, and I’m people too. Guns ‘N’ Roses will be coming soon.

Disc 608 is…. Give The People What They Want 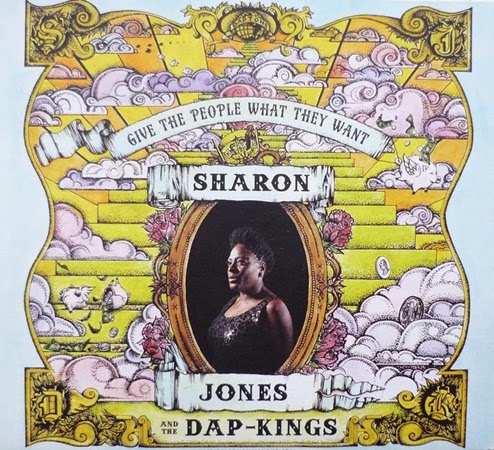 Artist: Sharon Jones and the Dap-Kings

What’s up with the Cover? Half Royal Seal of Soul, half hippy dream sequence. This cover has it all, from ornate lettering, to golden steps to flying pigs. At the centre of it all is Ms. Jones herself, looking like the strong self-assured woman she is.

How I Came To Know It:  This was just me buying the latest release from the band, as I have been a fan since 2010’s “I Learned the Hard Way.”  That album came my way after my friend Nick liked the look of it and took a flier on it, so while the new album is on me, getting into Sharon Jones in the first place I owe to Nick.

Being a successful revivalist act means walking that narrow line between being true to the original art form, and creative enough in your own right to be fresh and new in your approach. Sharon Jones and the Dap-Kings have mastered walking this line, bringing sixties and seventies soul music back with a vengeance.

This is my fourth Sharon Jones album, and I have yet to be disappointed. “Give the People…” is more of what makes this band great. The swinging rhythm is a mix of James Brown’s visceral funk and the more subdued and accessible Motown Records sound. The songs, however, are Dap-Kings originals. While they could easily be transplanted back forty years and still be hits, they also sound fresh today. This just underscores that a good song is a good song, regardless of what might be the fashion of the times.

In the case of “Give the People…” Sharon Jones is a bit more Supremes and a bit less James Brown than usual. The tracks have more early sixties background harmonies and is overall less funky than the bands’ earlier records. If you like that more polished side of soul, this is the album for you.

My preferences fall more toward the James Brown side of the equation and so as a result I prefer the earlier records I’ve heard. I do think this is merely a preference thing, though, and you just need to know what kind of soul and funk you like to know if this is the album for you.

The songs themselves are beautifully written and performed. The horn section is crisp and carries the energy of the songs, and Bosco Mann’s bass and Binky Griptite’s guitar shoulder the swinging soul groove that makes this style of music so singularly interesting. Also, it is hard to imagine two guys with cooler names.

On that note, I would be remiss not to generously tip my hat to Bosco Mann in particular for his vision in founding this band and bringing it all together. Mann writes half the songs on the record including “Stranger to My Happiness” which I consider the standout.

Sharon Jones was diagnosed with cancer in June 2013 but you’d never know it to hear this record, where her voice is still a power house. For all of Bosco Mann’s genius, you need a great lead singer for these songs, and Sharon Jones is definitely that.

While I missed the funkier qualities of the earlier albums, “Give the People…” is still a quality entry into the band’s discography, and a welcome addition to my music collection.

I might have missed this concert if it weren’t for my friend Patrick who tipped me off that Sharon Jones was coming to town. Sheila and I attended with Patrick and his wife Yvonne and a fine time was had by all.

The Alix Goolden hall is an old church and the acoustics are amazing, and I love seeing shows there. The one downside is the general seating system they employ, which means you have to line up an hour before the show to get a good spot. This time we were only 30 minutes early and I was nervous about getting into our usual favourite spot, but fortunately it all worked out. I’d tell you where that is, but it is a state secret.

British R&B singer and guitarist James Hunter opened the show. Hunter plays in a very old school style that reminded me of Chuck Berry and Buddy Holly. His guitar has a very sharp, percussive style and fills the room with a nice tone. He was hampered a bit by the sound, which was overamplified and causing distortion. I liked him, but he didn’t blow me away.

Then the Dap-Kings arrived and they did blow me away. Guitarist Binky Griptite plays the role of band leader, exhorting the audience to get into it in a way that never feels desperate or forced.

The band was exceptionally tight and every song had a groove that had you moving in your seat, or getting you out of it. Within five minutes of the show starting, everyone on the floor was up and dancing.

Sharon Jones is a force of nature on stage. Dancing around with genuine enthusiasm and a personality that was so big it threatened to blow the stained glass windows out of the old Alix Goolden Hall. At one point she danced herself right out of her shoes, but when she recovered herself she put them back on; Ms. Jones is a lady, after all.

At one point she had an extended run showing off sixties and seventies dances. I can’t remember them all, but I’m pretty sure I saw the chicken and maybe the swim. Whatever they were, the energy of all the fly moves was infectious. The whole experience felt like a traveling revival show, but without all the gloomy prophecy.

Jones also invited a young hipster up on stage early on and serenaded him with a spirited and sassy version of “You’ll Be Lonely.” The hipster had some moves of his own and was a fine addition to the show.

In fact, later on the band bravely invited people on stage wholesale and managed to play admirably while surrounded by 30 or 40 Victorians shaking their groove things. I was not among them (the last time I tried to dance with the young kids I wrecked the ligaments in my thumb).

As for the set list, the band played most of the songs off their new album as well as the better known songs off their earlier records. Most songs were extended well beyond the three to four minute studio versions, and yet never felt forced. The solos that each of the band members were afforded were similarly fun but not over-played.

By the end of the show the famously staid Victoria audience were all on their feet, clapping along (but only where appropriate – take note of that, American Idol studio audience!)

This concert affirmed that soul was never dead, and even if it had been, Sharon Jones could have brought it back to life by sheer force of will.
Posted by Logan at 10:32 AM