The Odyssey is a harsh mistress, and she metes out justice with little regard for reputation or personal taste.

I suppose I was asking for this to happen, with my recent musing on how many five star albums I've been randomly getting to review of late. Be careful what you wish for, my friends. 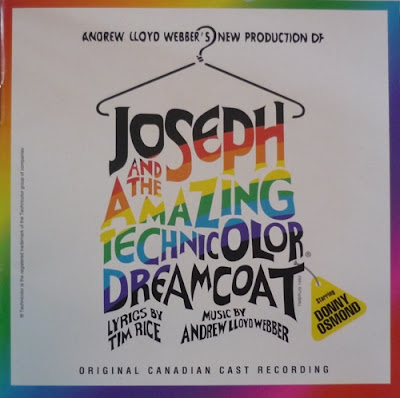 What’s Up With The Cover?: I believe this is is the promotional poster for the show.

How I Came To Know It: This CD belongs to my wife, Sheila. She and her Mom have a soft spot for musicals. I have no such soft spot.

As I noted above, I do not appreciate musicals. Even if the songs are catchy, even if the lyrics are clever (and they often are) I just can't get into them. They just seem overly...silly. And not silly in a good way, but silly in the way that young children think of as silly. I have never felt that kind of silly - even as a young child.

I gave Chess a couple of stars a while back simply for the singing, and for a couple of tracks that I thought had some gravitas. Also, I admire anyone who can write an entire musical about a chess tournament.

Les Miserables was actually enjoyable - it is a great original story, the music is top notch and it has an overarching tragic glory that transcends its unfortunate medium.

Joseph and the Amazing Technicolor Dreamcoat has a compelling enough story (it is from that best seller through the ages - the Bible), but they manage to suck any gravitas right out of it as they attempt to jazz it up and add a few yucks. At least that's what I think they're doing.

The sins of this record are legion - perhaps too many to mention, but since it is a music blog, let's hit the highlights, shall we?

First, it can't settle on a style. We have songs done in calypso, sixties pop, country and western and at one point a bad Elvis impersonation. It may be an attempt to pay these styles some kind of homage, but it comes off alternating between cheesy and mocking. Did I mention the Elvis impersonation? The pharoah of Egypt is Elvis, essentially. It works about as well as expected.

Second, it is interminably long - like 75 minutes. I shudder to think of the number of times I'd have had to drive around with this in my car, in the summer with the top down. Instead, I bit the bullet and spent an hour and a half painting to get it all over with in one listen.

Third, the lyrics are too clever by half. It isn't that they are consistently bad, but as Vincent Vega would say, 'it's the little things'. To which your inner Samuel L. Jackson might reply, 'example'. Well, in one place Joseph is interpreting the dreams of his fellow prisoners, who are described as:

"One was a baker, a cook in his prime
One was a butler, the Jeeves of his time."

Really? "The Jeeves of his time"? Tim Rice - you are better than that.

Another example - when describing the Pharoah, we are told:

Never has a misleading, ill-intentioned political statement rhymed better. Someone get on the phone and tell Tim Rice about Stalin.

Fourth and finally (because I promised to be brief), this musical features Donny Osmond. Like - a lot! He's practically in every scene. Not only that, they see this as a positive - his name is even on the cover of the album. Donny, please return to the seventies with your sister.

Maybe it isn't Donny's fault though - I've been conditioned since an early age to not like him. At the end of Alice Cooper's 1975 song, "Department of Youth" you can hear him ranting to a chorus of kids. A little routine, that if you are listening through the entire fade out ends like this:

I guess what I'm saying is, when it comes to musical theatre I'd rather watch my DVD of Alice Cooper's "Welcome to My Nightmare" tour. (Which is great by the way, with a visibly out of control and drunk Alice Cooper still nailing every performance in between random staggers about stage). But I digress.

To return to Joseph, you will note that I did not go "Two Dogs" here. These people still sing better than I will ever dream, and when Sheila puts it on I am rarely tortured like I am when the Odyssey forces me to pay close attention. It is basically, just pointless pop music, which can hardly be the worst thing in the world.

But more than anything, I must shamefacedly admit that I find one track, "Go, Go, Go Joseph", a bit of a guilty pleasure. Silly? Yes. Insufferably Broadway? Yes. Osmandesque? Yes. But dammit - it's catchy.

Also, the chorus is "Go, go, go, Joseph", a sentiment I very much can get behind.